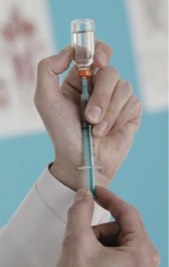 Immunotherapy treatment (allergy shots) is based on a century-old concept that the immune system can be desensitized to specific allergens that trigger allergy symptoms.These symptoms may be caused by allergic respiratory conditions such as allergic rhinitis (hay fever) and asthma.

Allergy shots can potentially lead to lasting remission of allergy symptoms, and it may play a preventive role in terms of development of asthma and new allergies.

Treatment involves injecting the allergen(s), causing the allergy symptoms.These allergens are identified by a combination of a medical evaluation performed by a trained allergist/immunologist and allergy skin or allergy blood tests.

The treatment begins with a build-up phase. Injections containing increasing amounts of the allergens are given 1 to 2 times a week until the target dose is reached.This target dose varies from person to person.The target dose may be reached in 3 to 6 months with a conventional schedule (one dose increase per visit) but may be achieved in shorter period of time with less visits with accelerated schedules such as cluster that administers 2-3 dose increases per visit.

Some people have lasting remission of their allergy symptoms but others may relapse after dis- continuing immunotherapy, so the duration of allergen immunotherapy varies from person to person.

Risks involved with the immunotherapy approach are rare, but may include serious life-threatening anaphylaxis. For that reason, immunotherapy should only be given under the supervision of a physician or qualified physician extender (nurse practitioner or physician assistant) in a facility equipped with proper staff and equipment to identify and treat adverse reactions to allergy injections.